KEEPING THE FALL ARMYWORM AT BAY

Asia tackles the pest from all angles

When a caterpillar munched through Muhammad Hasan Ali’s maize field in 2018, he was stumped as to what it was or how he could manage the voracious pest. All this Bangladeshi farmer knew was that his harvest and family’s income security were at risk.

“I had never seen this type of insect in previous seasons, but I soon learned from agricultural extension workers it was the fall armyworm,” he explained.

Researchers from the International Maize and Wheat Improvement Center (CIMMYT) anticipated its spread from sub-Saharan Africa and had proactively begun to prepare coordinated action with public and private institutions across South Asia.

Hasan Ali joined one of the many CIMMYT-facilitated training courses for extension workers and farmers, where he learned how to identify, monitor and control the destructive pest.

The fall armyworm’s preferred host is maize — a crop expanding faster than any other cereal in South Asia. The spread of the pest is a major threat to farmers’ livelihoods, as many rely on maize crops for their household income by selling it as feed grain for the growing poultry and fish sectors.

“Asia’s tropical climates are highly conducive for fall armyworm to be endemic almost throughout the year,” explained B.M. Prasanna, director of CIMMYT’s Global Maize Program and the CGIAR Research Program on Maize (MAIZE).

“Farmers need to be made aware of the significant environmental and ecological hazards caused by indiscriminate application of highly toxic synthetic pesticides to control the pest,” he said. “We are promoting an integrated pest management strategy, including low-cost agronomic practices, environmentally safer pesticides, biological control, biopesticides, and varieties with tolerance to the pest, working closely with both public and private partners.”

Representing CIMMYT, Prasanna is coordinating a global research-for-development consortium to build an evidence-based response against fall armyworm in both Africa and Asia.

JOINING FORCES TO DEFEND ALL FRONTS 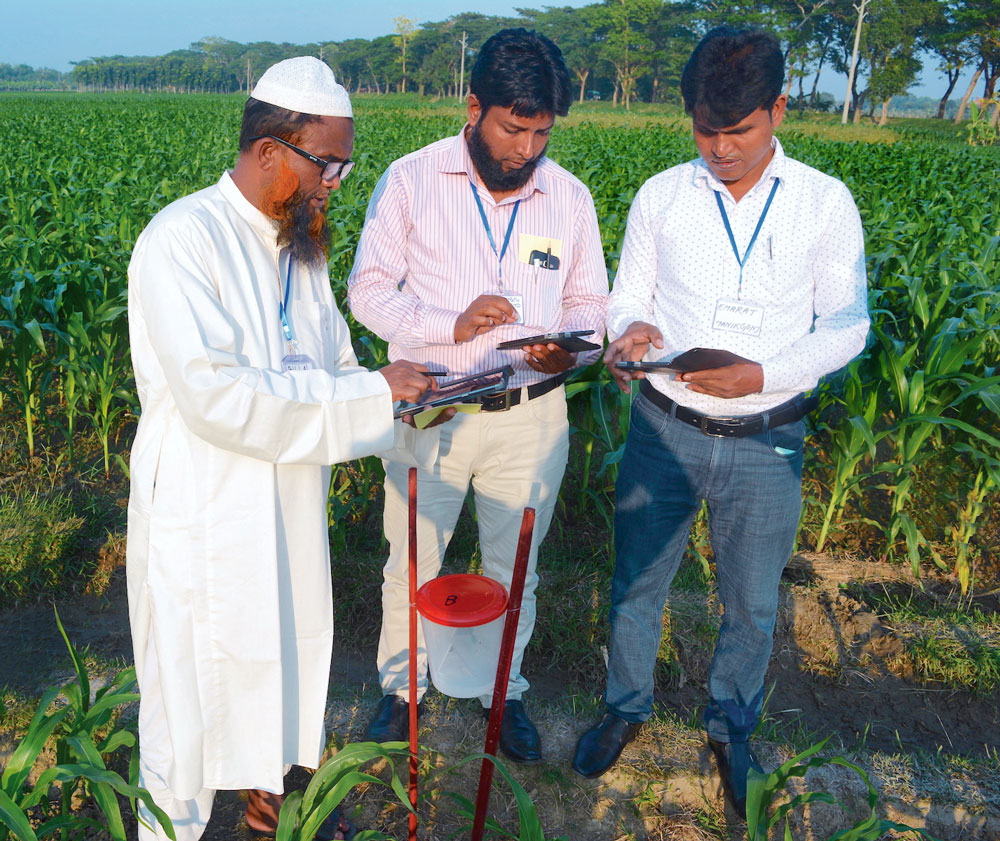 Participants of the Fighting Against Fall Armyworm trainings learn to collect field data through the Fall Armyworm Monitor web app in a farmer’s field in Chauadanga, Bangladesh.

In early 2019, CIMMYT partnered with international research funders and nonprofits to plan a regional response to the pest. This initiative brought together over 100 agricultural decision-makers from Bangladesh, Cambodia, India, Myanmar, Nepal, Sri Lanka and Thailand.

In South Asia, CIMMYT has helped national partners to address their institutional needs for an efficient response. Another key area of work has been the development of educational and training programs on integrated pest management.

“It is imperative that governmental extension agents are educated on evidence-based and sustainable ways to control the pest, and pass on these methods to farmers,” said Tim Krupnik, a CIMMYT senior scientist based in Bangladesh. “CIMMYT developed fact sheets, videos and radio jingles to promote integrated pest management strategies, which have been translated into multiple local languages and distributed to farmers across the region.”

CIMMYT researchers have also shared insights and experiences on local and national media.

“In Nepal, CIMMYT partnered with the Plant Quarantine and Pesticide Management Centre to broadcast a fall armyworm management video on national television, reaching an estimated audience of one million,” said AbduRahman Beshir, CIMMYT’s maize seed systems specialist based in Nepal.

Efforts towards establishing similar early warning systems have begun in Laos, Myanmar and Nepal, where CIMMYT researchers are working with governments, nonprofits and farmers to conduct surveys and build reliable networks.

CIMMYT researchers in Kenya have identified maize germplasm with resistance to fall armyworm and have used these traits to develop improved maize inbred lines and hybrids that are currently being tested in field trials.

“These efforts and the resulting resistant varieties will be distributed across Africa and Asia in the fight against the pest,” Prasanna said.

Biological control, including biopesticides, is another important component of integrated pest management strategies. In addition to supporting research by national partners on parasitoids, CIMMYT has engaged with the private sector to develop systems through which proven biopesticides can reach farmers in Asia quickly and effectively, Krupnik said.

This work is funded by the United States Agency for International Development (USAID), Michigan State University, and the CGIAR Research Program on Maize (MAIZE).