While many consumers are only familiar with white or yellow maize, native maize from Mexico and Latin America can come in a dazzling array of colors, including blue, red, or purple colored kernels. These deeper-hued varieties are gaining popularity around the world for their delicious taste and added health benefits, but are cultivated mainly by smallholder farmers on small plots of land, making it difficult to meet large-scale consumer demand.

Unlike white and yellow maize, which have many high-yielding hybrid varieties, most of the blue maize planted by farmers today are landraces, or native maize varieties passed down from generation to generation. These varieties contain important genetic diversity and play an important role in local culture and cuisine, but have lower yields compared to modern varieties.

Moreover, these varieties have greater variation in grain types between farmers, making it undesirable for large-scale market use. As native maize varieties were selected by indigenous people for local adaptation over thousands of years, they are still grown throughout Mexico but often perform poorly when moved to another region.

“These blue maize hybrids and OPVs will give farmers and consumers more choices on what they can plant and what they can eat, while also preserving the cultural diversity of Mexico and improving health and nutritional benefits”
Terence Molnar, maize breeder at CIMMYT

Researchers at the International Maize and Wheat Improvement Center (CIMMYT) are now working to develop the Center’s first sub-tropical blue maize hybrids and improved open-pollinated varieties (OPVs), a move that will provide more options for Mexican farmers and contribute to better nutrition for consumers.

“These blue maize hybrids and OPVs will give farmers and consumers more choices on what they can plant and what they can eat, while also preserving the cultural diversity of Mexico and improving health and nutritional benefits,” said Terence Molnar, a maize breeder at CIMMYT leading this project. “We’re also bringing in and preserving a lot of new genetic diversity, as all of these hybrids and OPVs are derived from traditional landraces from Guatemala, Mexico, and Peru.” 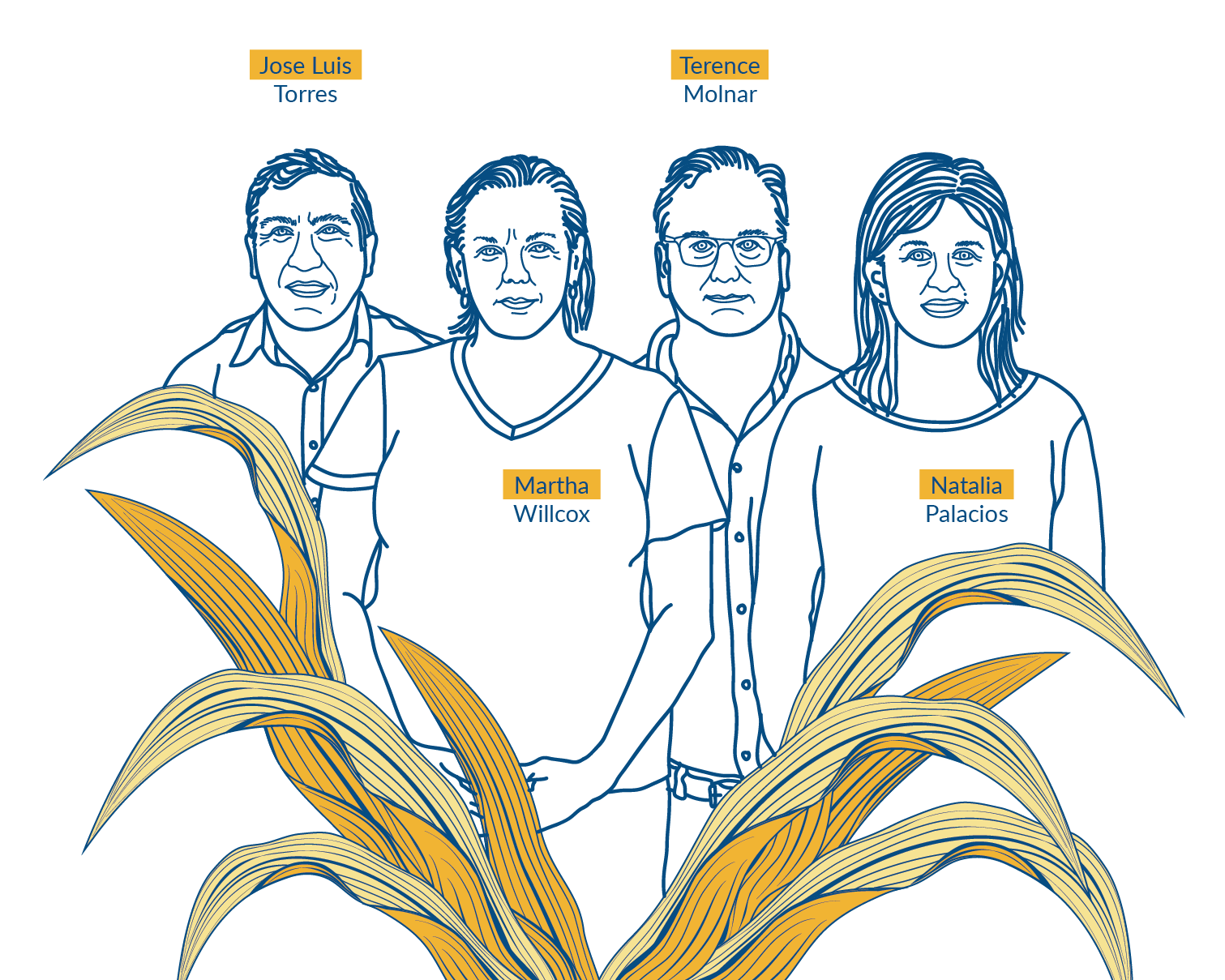 Trials have shown that the new blue maize hybrids can potentially yield over 12 tons per hectare under optimum conditions — triple the average yield of landrace varieties. They are also resistant to leaf diseases and ear rots, and thus show significant reduction in the accumulation of harmful mycotoxins such as fumonisins. Additionally, some of the grain quality parameters such as texture and kernel size are being monitored for farmer and end-user preferences.

Blue maize derives its rich hue from its high content of anthocyanin, a pigment with powerful antioxidant properties and many reported health benefits. Studies have claimed that anthocyanin can contribute to reduced cardiovascular disease by lowering cholesterol. Some blue maize landraces have also shown higher amounts of resistant starch, which preliminary studies have associated with their pigments and phenolic content.

“Resistant starch is a form of fiber that does not immediately become glucose in the body and breaks down more slowly,” says Natalia Palacios, CIMMYT maize quality specialist. “This reaction occurs in the colon rather than earlier in the digestive process, causing you to feel satiated for longer, and in the long run can help to prevent obesity, in addition to many other factors, although more research is needed.” 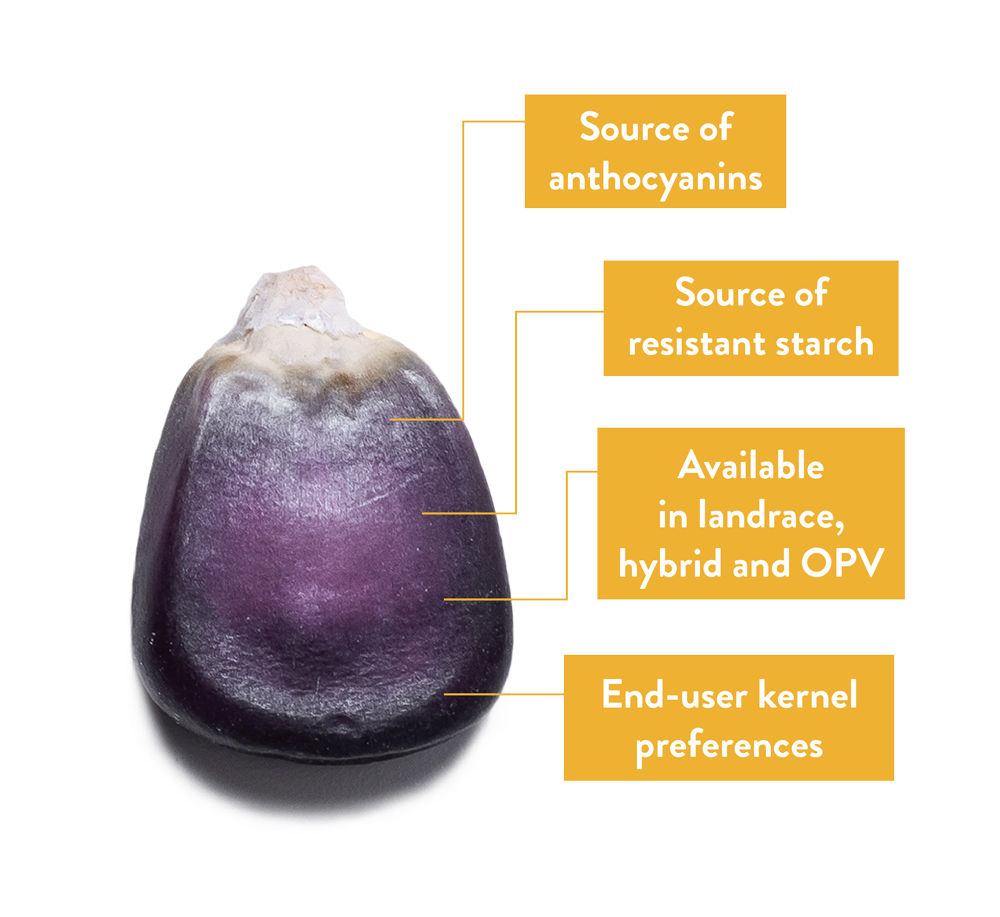 This added nutritional benefit could be extremely important in Mexico, among many other dietary interventions, as 65% of the population is overweight, 30% of the population is obese, and the country has one of the highest rates of deaths attributable to diabetes. “These blue maize varieties would have additional nutritional benefits to white maize hybrids currently in the market,” Palacios affirmed.

Blue maize work at CIMMYT has an intermittent 20-year history, according to Jose Luis Torres, a highland maize breeder at CIMMYT who has spent the past decade working on developing blue maize hybrids for high altitudes in Mexico. His hard work paid off in 2019, with the development of several hybrids and OPVs that are currently being tested by a large network of collaborators and will soon be available to farmers.

For farmers who want to continue planting their native maize varieties, CIMMYT’s maize landrace improvement coordinator Martha Willcox has worked to help facilitate the creation of a new civil association, ProMaíz Nativo, and a collective trademark, Milpaiz, to help farmers demonstrate the authenticity of their native landrace maize and receive fair prices for their work.

“We are trying to get a fair price for these farmers, as these native maize seeds are their inheritance, their own variety passed down through generations,” she said.

Willcox has found that smallholder farmers’ incomes have increased substantially under the fair-trade pricing scheme, allowing farmers to continue preserving the invaluable genetic diversity in their heirloom maize varieties.

“In addition to improving nutrition and increasing yields, CIMMYT’s work in blue maize is about giving farmers choices — so that they can choose to keep growing their native maize variety, or move to an OPV for greater stability, while other farmers may want hybrids. This is about giving farmers options that suit their needs,” said Molnar.

A field day for farmers, seed companies and end users was held in November 2019 in Jalisco, Mexico, to introduce the subtropical blue maize hybrids under development. The participants were very impressed with the varieties on display and expressed their interest in planting them as soon as they are available. “I think there will be a lot a of demand. It is hard to get blue maize in this region and it tends to sell out quickly,” said Marta Christina Velazquez Enciso, a local maize farmer. “I personally would be very interested in planting these blue maize hybrids, not just for their beautiful color but also because of the health benefits. I am glad CIMMYT is doing this work, because I think that the existence of blue maize hybrids would be beneficial to preserve the cultural and genetic diversity of maize in the region.”

This work is funded by Mexico’s Secretariat of Agriculture and Rural Development (SADER), through the MasAgro initiative, and the Kellogg Company.